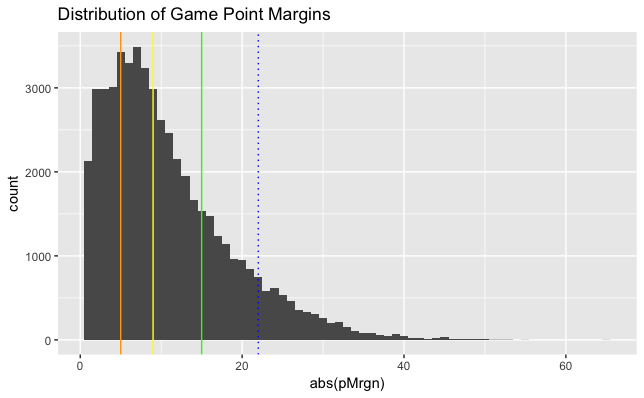 Understanding basketball’s distribution of point margins can be helpful to many basketball fans, especially those who participate in point spread betting.

In this post, I will attempt to show the distribution of point margins and how understanding it can give a competitive edge for those who place bets in point spreads. For this analysis, I used regular season games data from 1995 to 2016 seasons. The orange line represents the 25% quantile mark, which indicates that games ended within the 5 points difference 25% of the times.

The yellow line represents the 50% quantile mark, which indicates that games ended within the 9 points difference 50% of the times.

The green line represents the 75% quantile mark, which indicates that games ended within the 15 points difference 75% of the times.

And finally, the blue dotted line represents the 90% quantile mark, which indicates that games ended within the 22 points difference 90% of the times.

Notice that the distribution is symmetric across the y-axis. That’s because, for every team’s win, there is another team’s loss. One winning team’s 5 point margin means another losing team’s -5 point margin.

From here, we can get even more specific. What does distribution of point margins look like for home games? How about away games? Notice that in home games, the distribution mass of point margins is shifted to the right. That’s because teams tend to win more games at home and therefore there are more positive point margins.

We can also see that the distribution for home games is the same as that for away games in reverse direction. They are mirror images of each other.

So how is this information useful? Let’s see an example.

Below is a distribution of point margins of the games played by home favorite teams.

This distribution chart shows a few different things. For one, it tells us that home team favorites’ point margins are more likely to “land” on the right-side of the red line than the left-side, as can be seen by a larger mass of distribution.

That’s quite obvious, even without the help of the chart above.

However, what’s not so obvious is how likely home favorites will land on the right instead of the left. Is there a way we can quantify this likelihood? Luckily for us, there is.

The cool thing here is that we don’t have to draw the red line where point margin is 0. We can draw it wherever we’d like, like the one below. That means that, for a favorite team playing at home, there is a 56% chance its point margin will land on the right side versus 44% chance for the left side, despite the presence of the 5-point handicap set by the oddsmakers.

We can go further and be even more specific when creating a distribution chart. For example, we can use only the games for Cleveland Cavaliers playing at home where the team’s win percentage was at least 5% greater than that of the opponent team.

One problem with this approach is that the more we apply our specific conditions to filter out our data, the less data we have available to create the distribution chart. We are “thinning out” the data we need to map out the distribution everytime we impose an additional condition.

Nonetheless, with the right balance of specificity and creativity, a person betting on point spreads might be able to leverage this information when placing his bets.