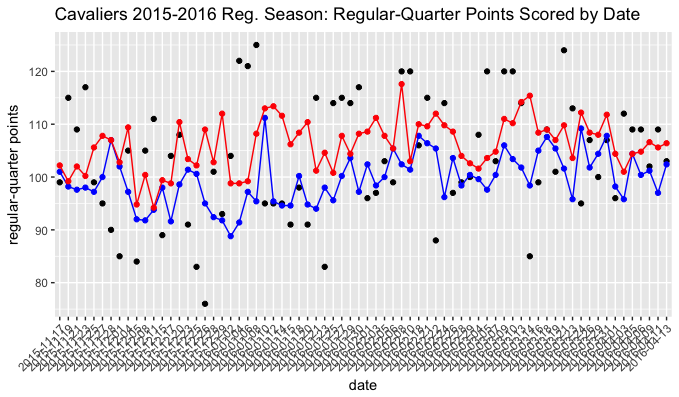 This is a question that I pondered many, many times. For this analysis, I used NBA regular season games data since the 1995-1996 season.

First, I wanted to see which variables correlated how well teams scored. Instead of focusing on the total number of points scored, I decided to focus on points scored within 4 quarters that excluded points scored in overtime.

I asked myself, “What are some variables that I can use to predict the next game’s points?”

I figured how well a team scored in the past would be a good indicator of how the team would score in the future. The following came to mind:

It also occurred to me that how well a team scores would also depend on the strength of its opponent’s defense. Hence, I looked at the following variables as well:

Then, it seemed logical to think that how well a team might score would depend on both the team’s offensive strength and the opponent’s defensive strength. And hence the following variables:

I measured how regular-quarter points correlated with the variables above.

* Performance metrics for cumulative means were considered where there were at least 10 observations.

We notice a few patterns here.

In the next blog post, I will attempt to improve our prediction by:

Predict winning teams in the Playoffs