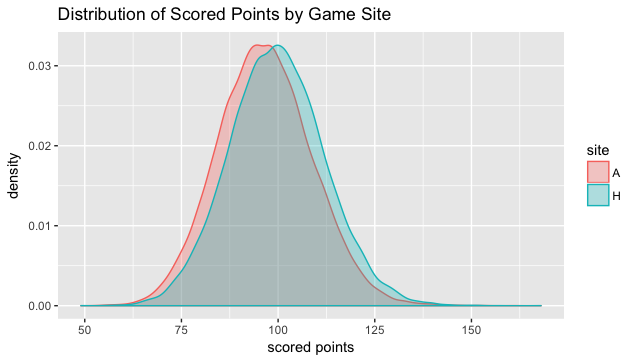 I wanted to delve into this phenomenon deeper and understand the source of this advantage. Where does this “advantage” originate from and how does it work?

To examine this, I decided to look at all the regular season games from 1995 through 2016 season. I looked at the teams’ win percentages by home and away.

It was evident that teams were more likely to win at home than while playing away. But the question was, why? Did they score more points at home than while they were away? Maybe home teams secretly benefitted from referees’ foul call favors?

I decided to look at how teams’ average scored points differed by game site (home/away). With such lopsided comparison, we had no way of knowing if teams inherently scored more point @home than @away because I didn’t control for other variables.

So I reformulated the question: “Do teams score more at home, given the same game outcome?”

When I accounted game outcome as a variable, the difference in scored points between home games and away games became less stark.

The differences were still there and they were statistically significant differences. Nonetheless, this suggested to me that there were other variables in play that helped teams win more games at home, other than simply being able to score more points. There seemed to be other driving forces to this “home court advantage” phenomenon.

Maybe referees were dishing out foul call favors for the home team and against the away team?

I am planning to explore this topic more thoroughly in the future. Stay tuned.